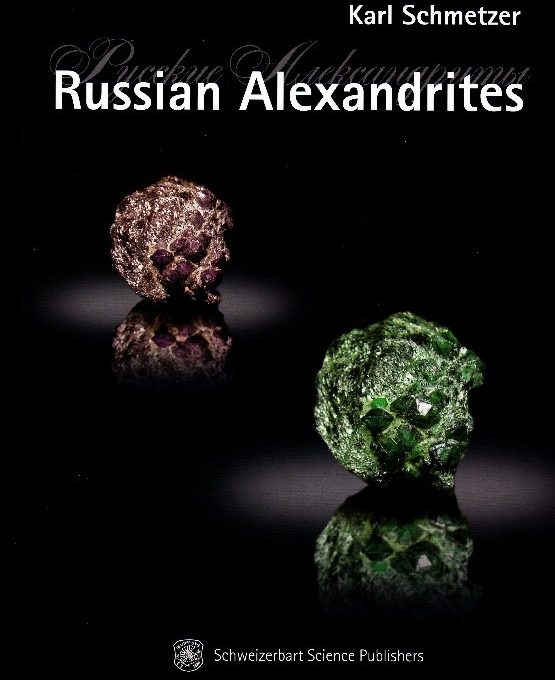 The origins of the first Russian Alexandrite (Chrysoberyl with strong change) require official credit to a person named Yakov Vasilevich Kokovin, or Y.A. Kokovin. According to gem historian Richard A. Wise, Kokovin was the Russian Ural Mountain Mine Manager around the 1800s. (Wise, 2016). Wise’s reference to Kokovin, albeit brief, is to our knowledge, one of the only publications that one person credit for alexandrite’s discovery. Wise’s source for this fact is the book “Russian Alexandrites.”

In the book “Russian Alexandrites” by Karl Schmetzer, some of the contributors: George Bosshart, Marina Epelboym, Dr. Lore Kiefert, and Anna-Kathrin Malsy set out to investigate the roots of Alexandrite’s naming in Russia.

After combing through the book for Kokovin’s name, it appeared that documents supported the idea that Kokovin’s contributions to Russia during his life were large. (Schmetzer K. , 2010).  However, controversy surrounded the recorded history of what happened to him. Some research suggests that he misjudged high value emeralds he oversaw. (Schmetzer K. , 2010). Again, it is unclear whether this was true or not. The reason for Kokovin being relieved of his duties is still speculated.

Kokivin was even imprisoned. In fact, “his health was poor as a consequence of losing his position and all the honor bestowed on him for his work as a lapidary artist and stone cutter…” Id.  Kokovin’s downfall took place with the knowledge of Alexander’s father, Tsar Nicholas Id. Moreover, Kokovin shared a well-documented animosity with another central character behind Alexandrite’s first recorded discovery: Count L.A. Perovskii.

The earliest documented connection to the discovery of alexandrite in Russia came from the Russian Imperial Mineralogical Society (Established in 1817). (Schmetzer, 2010).

The discovery of the first Russian Alexandrite itself has divergent origins. This is even clear from GIA’s own characterization of Alexandrite’s origin: “discovered in 1830 by miners in the Ural Mountains of Russia…” (GIA, 2018) (Emphasis Added). The fact that an institution like GIA simply uses “miners” to credit discovery further shows the ambiguity behind crediting someone for the new variety designation.

Besides the difficulty in narrowing the exact individual who mined it, an alexandrite’s chameleon type attribute would further complicate realizing its true identity. This complication is due to the fact that Chrysoberyl (the mineral Alexandrite falls under) had been already discovered prior to 1830. Therefore, in order to distinguish chrysoberyl from beryl or emerald, a second person (besides the actual miner) would have to have some mineral knowledge. It appears that after identifying it as chrysoberyl, and seeing that the chrysoberyl underwent color change, the questions arises as to who had the eureka moment of coining the new varietal name.

Given these nuanced circumstances, you can imagine crediting a single individual as responsible for discovering the first alexandrite in Russia to be tricky. On the one hand, one could say that finding the mineral itself would mean credit for discovery. On the other hand, some might say that taking the steps to determine that it was simply chrysoberyl with promimant color would warrant credit.

Where did the name come from?

By many accounts and published sources, Finnish mineralogist, Nils Gustaf Nordenskjold, is credited with finding the first samples of Alexandrite material in Russian emerald mines. (AGL, 2008). Consistent online and physical resources further suggest that Nordenskiöld (sometimes spelled Nordenskjold) came up with the suggestion of the actual name variation “Alexandrite.” Currently, this remains to be the most consistent story: that the name Alexandrite was Nordenskjold’s idea. The story stems from Nordenskiöld

coining the name Alexandrite after being inspired by the future tsar Alexander’s birthday celebration in the Ural Mountains area where the stone was found.

Over the course of the book “Russian Alexandrites”, the Nordenskjold’s family archive is reviewed along with correspondence written by him. In the book they report that, prior to 1842, the researchers say they were unable to find the word “Alexandrite” in letters written by Nordenskjold. In fact, there is some suspicion surrounding the Russian authorities at the time being involved with censorship. (Schmetzer K. , 2010) You can imagine the dramatic control the government had over the country given the future demise of Tsar Alexander.

Accordingly, strong evidence suggests that the source of these would be samples was actually a person named Count L.A. Perovskii. (Schmetzer, 2010). Shockingly, it would be Pervoskii who had an animosity with Kokovin (who would be ousted from his position and scrubbed credit of his mineralogical contributions). One can suspect that this had a lot to do with the murky background into the first alexandrite chrysoberyl variety discovery.

This revelation that Nordenskjold did not himself find the chrysoberyl himself is telling. This runs contrary to many online sources and published articles that describe the history of Russian Alexandrites.

Aside from Nordenskiöld and Pervoskii, there are a few other people who contributed to the discovery of Alexandrite in Russia.

In 1829, Gustav Rose, who was a German professor of minerology, claimed to have observed a new gemstone during his investigations. (Schmetzer, 2010). His description of chrysoberyl included notes of color change, elements chromium and drawings of the crystals. Supporting the claims behind Rose’s observations, a collection of “Chrysoberyl” is part of the Museum Fur Naturkunde in Berlin, which includes Rose’s handwriting on the labels, however, it is worth noting that Rose did not know that Alexandrite was the name and was a title given as an honor to the Tsar. (Schmetzer, 2010)

In another related coincidental series of events, it would be an unknown person working for Gustav Rose’s brother, who worked for the Russian Mining Engineer Corps who would perform the first “quantitative chemical analysis of chrysoberyl from the Urals.” Id. Schmetzer’s book does not inform us of who this person was.

It is unclear whether this could have been Kokovin. Historical circumstantial evidence would suggest this to be a plausible theory.

Officially, 10 pages in this book go on to use the name ‘Alexandrite’ to describe chrysoberyls from the Urals (Russia). (Schmetzer, 2010). Accordingly, the book was edited by Ingenieur-Obrist H.A.G. von Pott.

Schmetzer’s book on Russian Alexandrites cites one additional contributor to Alexandrite’s discovery in Russia. Von Lenz is allegedly noted in the 1842 book as another key player in the discovery. However, the Shmetzer book is vague on the details of this person beyond being an editor of this book.

One has to wonder how the authors of the 1842 book are able to publicize all their credit for Alexandrite’s discovery, yet leave out Kokovin. This is further baffling given that the researchers of the Russian Alexandrite book state: “although Kokovin, as a finder and discoverer of alexandrite, should have had some association with the naming process, his disgrace, having been accused of stealing emeralds from the Emperor’s property, made this possible.” (Schmetzer E. G., 1982)

One could suspect that if the Russian Government during the 19th Century had it out for you, that your name could easily be censored and removed from history books. Moreover, it would be, Perovskii, who happened to have bad relationship with Kokovin, who coincidentally provided the samples of what would eventually be the first ever chrysoberyl specimens of Alexandrite. The void left by Kokovin’s absence in the process, would make the perfect opportunity to name the stone in whatever they felt was convenient at the time. Honor and dignity to the most powerful future leader of Russia would be a wise strategy for anyone seeking influence or financial motivations.

Unfortunately, no one can definitely say Kokovin deserves all the credit. While GIA correctly acknowledges an anonymous miner for pulling the stone, the remaining individuals involved with recognizing the material as chrysoberyl, and then proposing a new name variety “alexandrite” cannot all be attributed to one person.

According to author Karl Schmetzer, in the 188 pages of the 1842 book (written in German), the information is quite vague surrounding the name Alexandrite itself. Instead, it appears that individuals are cited with the process of analyzing the chrysoberyl samples and recognizing some unique attributes. Unfortunately, not enough concrete evidence suggests that Nordenskjold is all deserving. The world may never know who decided to coin the name Alexandrite as its own new variety of chrysoberyl. Therefore, the existence of Russian Alexandrites remains as elusive as the evidence to prove who discovered it.

A 21.41 carat Alexandrite from Russia that sold in 2014, at the Geneva Christie’s Magnificent Jewels Auction for $1,325,000 CHF (1.3 Million USD). To date, this is one of the most recent of Alexandrites from Russia of this size to be sold at auction.