The beginning of the Rare Gem Collection dates back over 40 years ago. The roots of our story start with our founder: Joseph “Joe” Zaroovabeli.  After years of learning, traveling, and trading, Joe developed an expertise in colored gemstones.  His original company M.Z. Impex Corporation was established in 1977. What started as a family business would draw inspiration from Joe’s late Father who collected rare coins as a hobby.  Joe decided to personally select the rarest gemstones for his own collection.

Joe (middle) with his late parents 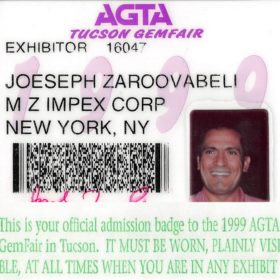 In 2012, Joe’s only son, Justin, joined  M.Z. Impex after a brief stint practicing law. His legal background gave a fresh perspective on the gemstone trade. Together, Joe and Justin eventually decided that specializing was the future of gemstones. Instead of following the traditional gem house route of carrying everything, they decided to focus on what they believed to be the two most mystifying colorful gemstones: Alexandrites and Padparadscha Sapphires. In 2014, the new company was launched as The Rare Gem LLC,  which still maintains itself as a trade supplier of Alexandrites and Padparadscha Sapphires.

Over time, it became clear that the demand for special gemstones was not being met around the world. Specifically, a trusted source for Alexandrite was needed to be available globally. In order to cater to this limited group of gemstone hunters and enthusiasts, The Rare Gem decided to share Joe’s personal private collection.

Not everyone can own a piece of extraordinary nature that is unique and irreplaceable. Those that want to now can. Vespertine Alexandrite is our unique Natural Alexandrite.

Joe with his son Justin