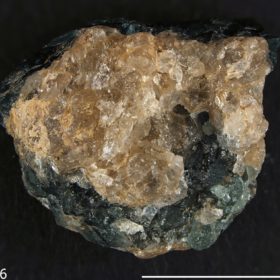 The scintillating blue stone was given the name of “Sapphirine” due to its striking resemblance to sapphire. However, both minerals have completely different chemical make-ups and properties. The stone owes its namesake to its striking blue color, but in some instances it forms in a reddish-orange color. The stone is very rare and is often viewed as a collectors item.

Sapphirine was first discovered in August 1890 at an old harbour in Fiskenæsset, West Greenland. It was discovered by K. L. Giesecke as he looked for other stones on the coast, just happening to stumble upon a stone he was unfamiliar with. After determining that it was a new variety of gemstone, he gave it the name of “blauer Diamantspath”. As Giesecke handed the stone sample off to Stromeyer, he later changed the name to “Sapphirine” in allusion to its “sapphire”-like color. As history progressed, Sapphirine remained a very rare stone with little known about it. The largest sample ever found lies just under 2 cts., making even the smallest stones valuable for collectors. Sapphirine also has the potential to form with a pinkish tint, with those gems being even more rare.

Where can it be found?

Although it was discovered in Greenland, there are few natural deposits of Sapphirine there. Sri Lanka and the southern Madagascar region have since become the biggest supplier, yet the total amount of Sapphirine in the world remains small. In more recent times, there have been very small and clear stones found in Pakistan and Kenya.

Sapphirine is classified as a relatively hard gem, with it ranking a 7.5 on the Mohs scale. It has a vitreous luster and its streak is white. Sapphirine is also usually transparent to translucent. Its empirical chemical formula is (Mg,Al)8(Al,Si)6O20, with iron, magnesium, and aluminum being the fundamental elements.